Showing posts from January, 2016
Show all

Of Gourmands, foodies, and gastronomes 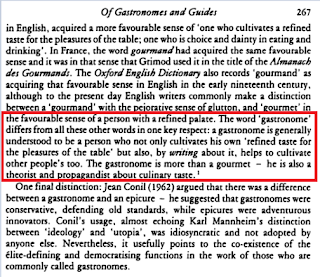 Once upon a time, I was the only one at any given table whipping out a camera to document my meal. At least one family member would pre-emptively wave an arm out at anyone who would try to eat before my customary food picture was snapped. Allow me to try and give you, dear reader of today, a little perspective. This was in the early 90's, so there were not yet cell phones, iPhones, or digital cameras (well, there were, but they were incredibly expensive and I was just a kid, and  the quality was terrible). I used a film camera. It was a great Olympus point and shoot that came in gold. That means I was the one weirdo spending film on food pictures and not getting paid for say, Bon  Appetite  magazine or the like.  My friends viewed this as a quirk of mine, and I learned to embrace my "inner weirdo" of photographing my food. It's interesting how times have changed and now it's rarer for someone to eat their food without first taking a picture. At one embarrassi
Post a Comment
Read more